The Town of Bedford GIS wetland maps were developed from aerial photos of the April 2003 Town flyover. The Town's consultant, Sanborn, imported data on planimetrics and topography from the 1999 aerial photos by Chas. H. Sells, scanned the wetland boundaries from the 1982 maps and added many surveyed wetland delineations. Sanborn then used photo-interpretation methods to identify new wetland areas and propose revisions to the 1982 wetland boundaries. The planimetrics showed where development had taken place within wetlands since 1976; in such cases, Sanborn added a revised wetland line outside the developed areas, as well as the 1982 line running through the development. The contract with Sanborn included some field analysis by local wetland consultants, but this effort did not cover more than a few wetlands. All wetland boundaries - 1982, new wetland areas, revised lines and surveyed lines - were retained on the draft images.

The various wetland lines were analyzed with respect to specific locations and knowledge of existing conditions, along with information in the Conservation Commission project files and field review of some areas. As this review progressed, new revised wetland lines were added in some areas, and in all cases, one wetland line was chosen as being the most accurate. The current GIS wetlands maps will not indicate whether a wetland boundary has been changed from the 1982 maps, with the exception of surveyed boundaries, which have a more angular pattern.

It has not been possible to research every property that has come before the Conservation Commission for wetland location and project review or to arrange site visits to every property that contains wetland areas. In addition, the adjustments that have been made are approximate; most do not include any measurements from fixed locations.

Approved wetland delineations are valid for three years from the date of acceptance by the Bedford Conservation Commission. In addition, new projects come before the Commission on a continual basis; as such, the Town's wetlands maps are always under review and subject to change when more accurate or additional information is received, either through visits to private property, detailed file review, or simply revisions to the maps as projects come before the Commission. 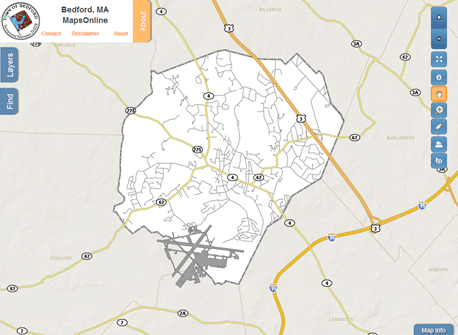 Use and Interpretation of the GIS Map Wetlands Data Layer